Snarky Puppy trumpeter Jay Jennings and his quartet demonstrate how to do nostalgia right.

In 2017, when La La Land came to UK cinemas, I railed against its interpretation of jazz. It posited that the genre was dead. Why? Because the world had largely moved on from a certain brand of LA bop of which director Damien Chazelle was particularly fond. Clearly, Chazelle felt personally wronged by jazz musicians not wanting to relive his favourite music for all eternity, so he dedicated a significant portion of the film’s two-hour run-time to petulantly demanding that the genre stop changing goddammit.

The thing is, if Chazelle had stopped and looked around the contemporary LA jazz scene, he would have seen that the style hasn’t gone away, in fact, there are plenty of musicians who straddle the line between the nostalgic world in which the director exists, and the contemporary one he disdains.

One such musician is trumpeter, composer and Snarky Puppy member, Jay Jennings (or Yay Yennings in the context of this new project of his). Jennings is a contributor to some of the most exciting subsections of the contemporary jazz scene, but he’s also a lover of the kind of music being mourned in La La Land, and a pioneer of a forward-looking bebop revival movement. He’s just self-released a daring new album, his debut as a band leader, and it’s remarkable how fresh and exciting music like this can feel in 2019. 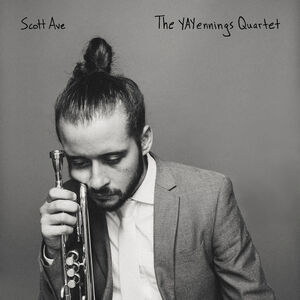 The album, Scott Ave, released by Jennings under the YAYennings Quartet moniker, is a collection of 11, short, original bebop compositions inspired by Chet Baker and Stan Getz’s quartet projects with a band comprised of trumpet, tenor sax, bass and drums. The band gels superbly together, with the lack of a comping instrument facilitating inventive, polyphonic back-and-forth between Jennings on trumpet and fellow Snarky Puppy member, Bob Reynolds on sax, ably accompanied by drummer Jose Perez and bassist Ross Schodek.

What’s really special is how these compositions really do feel like developments of the bebop style. They’re not contrafacts of popular older tunes, but brand-new, complex melodies over original changes. It’s a familiar sound, but the tunes are different enough that they present a genuine challenge to all of the musicians involved – a challenge that the whole quartet rises to with real grace.

There’s also a lot of excitement and complexity weaved into this unexpectedly short project. None of the tracks run longer than just over four minutes, with most sticking close to the three-minute mark. This is because there’s enough complexity, both in the construction of the tunes themselves, but also in the manner of interaction between Jennings and Reynolds, that the kind of exciting musical development and virtuosity one expects from contemporary jazz is easily and comfortably compressed into a shorter time frame. The actual pieces are pretty varied too. There are faster tunes that require a scary level of dexterity, like the title track and the closer, ‘Hung Up’, as well as slower ones like ‘June Gloom’ and ‘Standing’.

It’s not all about the speed either. Even the slower tunes contain more technically daunting moments. The fascinating thing about these compositions is that they grow and change. The format isn’t just head-solos-head, but rather often follows more of a narrative structure, with the soloing incorporated into that narrative. Said soloing, too, isn’t merely about the two soloists leaning on one another to support interesting ideas, but it’s also about highlighting the contrast in stylistic approaches. Jennings is a traditional, bebop aficionado, weaving complex runs around a single melodic through-line, while Reynolds’ playing is more contemporary and rhythmically informed. The two styles are distinct, but hold one another up beautifully, never getting in each other’s way or competing for creative control.

The reason this record succeeds as more than a cynical nostalgia piece in the late 2010s, where La La Land did not, is because it’s using nostalgia as a starting point to push this kind of music forward to a place that feels relevant for more substantive reasons than wanting things to go back to the way they were. Superb playing and thoughtful, forward-thinking writing makes Scott Ave one of the most successful and meaningful applications of nostalgia in recent memory.